The full scale of the challenge to upgrade Yeadon Way in time for its scheduled re-opening in May was laid bare during a visit to the site.

Engineers say the £3.3m scheme is currently running on time and to budget with work now at week 11 of a 28 week programme.

The direct link between the M55 motorway and Blackpool town centre is due to re-open by 25 May following extensive strengthening work on a 2km stretch between Hawes Side Lane Bridge and the Ashworth Road roundabout.

Council chiefs were given an update on progress from contractor Eric Wright Civil Engineering amid pressure to ensure the key route re-opens on time.

It was closed to traffic on Monday 11 November last year at the end of the Illuminations.

Yeadon Way carries on average 12,000 vehicles a day bringing tens of thousands of tourists into Blackpool during the height of the holiday season.  Such heavy traffic levels combined with ageing infrastructure built on an old railway embankment has seen the carriageway weakened in recent years.  Without a massive injection of cash it could have been forced to close permanently, clogging the resort with congestion.  This is the second phase of work after the first tranche was completed in 2015.

Coun Fred Jackson, cabinet member for highways on Blackpool Council, said: “We’re very pleased to be working with Eric Wright as they have an excellent record.

“They are on target and on budget and everything should be completed by the second bank holiday in May.

“That depends on the weather and we have been fortunate so far.  They are working 12 hour shifts each day and on Saturdays, so everything is being done to ensure it is finished on time.

Coun Jackson said the route was vital to both resident commuters and visitors.

He added: “This is the second stage of work taking place on Yeadon Way, and it is vital to our important tourist trade and other businesses as well.

“We have been informed this work will last 40 years so that’s very encouraging for the future of Blackpool.

“A lot of local people use this link to the motorway on a daily basis so it’s a very important link for both visitors and people who commute day in day out for their work.”

As diggers move huge piles of earth from the surface of the carriageway ready for reinforcement work, it is difficult to imagine traffic returning in four months time, which is why engineers are working hard to get the huge project finished.

As well as strengthening the road, it will be completely resurfaced and drainage is being moved from the centre to the edge.

The old concrete embankment barriers have been removed and crushed because their weight was adding to the pressure causing the carriageway to sink.  They will be replaced by steel barriers and fencing capable of withstanding the same level of impact as motorway barriers.  Drivers will also see 90 new street lights installed when they return to using the road.

Gavin Hulme, operations director for civil engineering at Eric Wright, said: “Most of the material we take out is reusable but we reinforce it before putting it back in.

“Because the carriageway is on a historic railway embankment which is over 100 years old, it had settled and pushed outwards and a lot of the work is to strengthen the sides.

“The drainage is also being moved to the outside of the carriageway which will make it more accessible for maintenance purposes in the future.

“It will be different visually to drivers when it is completed as the concrete walls have been removed so it will appear more open with steel barriers and a fence.”

He added: “As well as creating an improved road surface we are delivering a solution to ensure it has a long and maintenance free life.

“It will improve the experience for visitors arriving in Blackpool and for local residents who use the road daily.

“It is important for the economic success of the town that Yeadon Way is built to last in order to minimise journey times and delays now and in the future.”

It was built in 1986 on the route of the Marton to Blackpool Central railway line which opened in 1903 and closed in 1965 and is named after the former county surveyor of Lancashire Harry Yeadon.

Over the last 30 years the road has experienced settlement and movement of the concrete safety barriers a consequence of the legacy of the original railway embankment construction.

The newly resurfaced carriageway will be 7.3 metres wide, with another metre of space on either side.

The first phase of investment in Yeadon Way was completed in 2015 when a £3.6m programme of works saw worn out sections replaced between St Anne’s Road and Hawes Side Lane.

The current £3.3m scheme has been fully funded by the government including £1m from Blackpool Council’s Local Transport Plan.

Following completion of both phases of work, Yeadon Way is expected to have a lifespan of around 40 years.

As part of the delivery programme, Eric Wright Civil Engineering is aiming to reuse up to 75 per cent of the existing material reducing landfill and lorry movements. 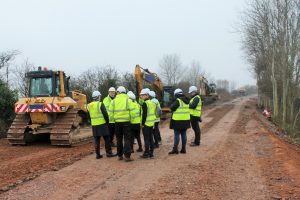