Scott Street Bridge in Hull was decommissioned in 1994 and was recently targeted by the famous artist, Banksy.

Specialist contractor, Eric Wright Civil Engineering, has been appointed to dismantle Scott Street Bridge with work due to start later this year.

The grade two-listed bridge, which was decommissioned in the 1990s, was thrust into the limelight in January 2018 when Banksy used it as a canvass to create a work depicting a figure of a young boy brandishing a pencil for a sword called “Draw the Raised Bridge”.  The artwork was later posted on Banksy’s official Instagram page.

The artwork was carefully removed by being cut off one of the decks in October 2019 and moved to a safe location while a decision is made on where it should be displayed.

But now the bridge itself is set to finally disappear as Hull City Council announced civil contractor Eric Wright Civil Engineering has been appointed to carry out the work following an open tender process.

Plans to remove the grade two-listed bridge were developed in conjunction with Historic England, after the structure was deemed as a risk to river traffic.

Councillor Daren Hale, portfolio holder for economic investment and regeneration, said: “Following the successful removal of the Banksy, we can now proceed with the rest of the dismantling of Scott Street Bridge.

“Our ambition is to rebuild a replica of Scott Street Bridge during phase two of the works and we can only do this with the help of specialist contractors.

“It will be a complex operation, but we want to ensure that the process is handled as sensitively as possible.”

The Banksy currently remains in secure storage and options for its restoration are being discussed.

Scott Street Bridge closed to traffic in 1994, due to its extremely poor structural and mechanical condition. Since then, the bridge has remained in the raised, upright position, structurally supported by steel ties.

Current inspections of its condition have concluded that dismantlement and removal is now the only viable course of action to prevent an uncontrolled collapse of the structure.  Engineers found the transverse girders of the 117 year old structure to be on the point of failure and warned that even a bridge strike of minor proportions could lead to complete failure of the bridge leaf.

Eric Wright Civil Engineering will begin work on site later in the year. 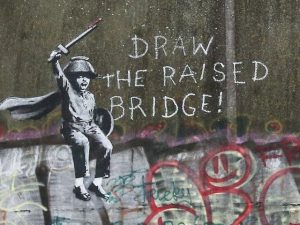 Eric Wright Construction, part of the Eric Wright Group, has been appointed by the Department for Education (DfE) to deliver a new technical workshop,...

Exciting plans to transform Carlisle Railway Station and the surrounding area remain on track with the appointment of the contractors for design and build...