During the MIF festival this year, we celebrated Peter’s retirement. Fellow colleagues and clients joined Peter to wish him the very best of luck and to say thank you for his many years of service to the Eric Wright Group and the construction industry.

Peter joined Eric Wright Construction in September 1993 as a Principal Design and Build Estimator and retired after 26 years’ service to the business.  During his career, he worked alongside our development team to deliver substantial projects including Heywood Distribution Park, Stonecross Park, Cabot Park in Avonmouth, the Ask Framework and Saracens RUFC new stand in Barnet, north London.

When asked of his highs and lows he fondly remembers the many characters he has met throughout the years.  Lows cited working though the recession and the financial crash of 2013.

Peter has thoroughly enjoyed his 26 years with the business and plans for his retirement include: golf, DIY, gardening, time with the grandchildren, lots of holidays with 3 planned to Europe this year and a long trip to Australia next Spring.  Peter also plans to get out the watercolours and try his hand at painting!

We wish Peter well for a long and happy retirement. 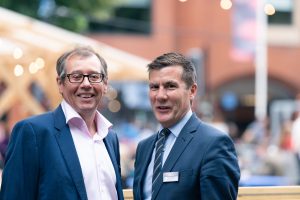 Eric Wright Facilities Management (EWFM), one of seven companies within the Eric Wright Group, has made appointments at director level as part of its...

Eric Wright Civil Engineering (EWCE) is making good progress on the remediation works at the Sugden End Landfill site at Keighley near Bradford with...