Group, Maple Grove DevelopmentsPemberton Road in Wigan has been shortlisted to be crowned as one of the Friendliest Streets in Britain

A campaign has been launched to find ‘Britain’s Friendliest Street.’

In Good Company, a street art project is looking to spread goodwill by rewarding local communities that have pulled together despite the challenging times of COVID-19.

Communities that have a ‘fantastic spirit’, have ‘come together’ or even just looked out for one another during the last few months are being encouraged to submit nominations in a hunt for the cheeriest neighbourhood in the country.

Each nomination explained in 500 characters or less why their chosen street should be awarded the title, and Pemberton Road, where our very own Nik and his family live, has been shortlisted in the final ten.

The shortlist of ten are now looking for votes to determine who is crowned ‘Britain’s Friendliest Street’ and they need your help to get themselves to the top of the leaderboard.   To find out more and nominate a street, visit this website: http://www.ingoodcompany.vote/

“If Carlsberg did neighbours, you’d choose mine.  From the start of lockdown, the street has managed to become a community even living on a long main road.

A WhatsApp group was set up to support all of the neighbours including those self isolating, the elderly and those who live alone. Friendships have been formed and we have lifted each other up during these strange times over social media and the telephone for the less tech savvy. We have learned about the history of our street, previous residents and even the unknown house names. We are also learning about each other, the adults, the children and furry friends.

Shopping issues aren’t a problem – there are several shout outs a day so if you need anything, it is collected and dropped off at your door. Recent items include pharmacy prescriptions, clotted cream and scones, birthday candles and fruit and veg from the local farm.

Madness – Our House video co-ordinated by Nikki whose day job is in finance. We had huge amounts of fun making this: https://www.youtube.com/watch?v=YFp7xN3QeHg 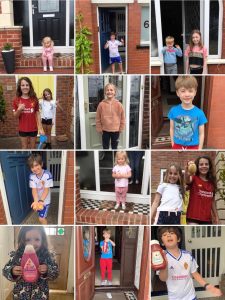 She wouldn’t take any money so we all contributed to a charity of her choice – AlderHey children’s hospital in Liverpool where street and other donations are over £600 to date.

Mark is our resident Quizmaster who takes his entertainment role very seriously – we’ve managed bingo, music, general knowledge all over an app. You can choose to partake in all or none. There’s no pressure and prizes are donated by different neighbours for the winners.  Isolation birthdays have been incredible. Neighbours on their daily walk singing happy birthday through the garden gates, posters drawn, the cards made and presents at the end of garden paths have delighted young and old alike.

Co-ordinated window and house displays with rainbows, teddies and VE bunting has delighted the whole neighbourhood who incorporate the road into their daily exercise regimes. Chalkings on the pavement outside my gate allows me to see children and adults of all ages doing hopscotch, star jumps, jumping in circles and hopping. It brings a smile to my face whilst I work at my desk.

My two posters on the gates from In Good Company have been the topic of conversation. People stop at the gates to chat, take pictures and parents explain to their children what the artwork says and who it is raising money for.

We don’t just do the Thursday clap for the key workers – we have pans and spoons, whistles, fireworks and cheer like crazy to thank those who are going out and doing an extraordinary job. They are all true superheroes in our street’s eyes.

We may not live in a cul de sac or on a huge housing development where you can see each other all the time but Pemberton Road is in my eyes the Friendliest Street in Britain.”

Eric Wright Civil Engineering (EWCE) has completed £5.9m of improvement works for Manchester City Council to remove the notorious pinch-point on the A57 Hyde...

Well done to Julian Johnston and the site team for achieving Performance Beyond Compliance on their recent considerate constructors report. The Considerate Constructors Scheme, a national...

Eric Wright Group is two years ahead of schedule in meeting its electric fleet targets. The Bamber Bridge based property company was aiming to...

Read more
12 May 2021 · 9:10 World FM Day recognises and celebrates the vital work that FM professionals contribute to business worldwide. This… https://t.co/jL8Uk73gUR
7 May 2021 · 11:46 Our work to help transform Northbank for @WirralWaters has achieved Performance Beyond Compliance by the Considerat… https://t.co/UzWE9VtQJ4
5 May 2021 · 16:21 Our civil engineering business completed improvement works for @ManCityCouncil to remove the notorious pinch-point… https://t.co/lnwW9I7sRf
30 April 2021 · 10:25 We're delighted to have been appointed on the ESPO - Public Sector Procurement national framework for Facilities Ma… https://t.co/MtP3ud8dCP