Maple Grove Developments, part of the Eric Wright Group, has been selected by Blackburn with Darwen Council as the preferred development partner for the former markets’ site in Blackburn town centre.

Following the demolition of the covered market building in 2013, the 3.75-acre site is currently used as a public car park. Designed by DLA Architecture, the proposal is for a retail-led mixed-use scheme which will help to strengthen Blackburn’s existing shopping offer by providing a small number of large retail floorplates in the town centre. Brady’s have been appointed by Maple Grove Developments as letting agent.

Andrew Dewhurst, Director at Maple Grove Developments, said: “We’re very pleased to have been chosen as preferred developer. This is a large and prominent town centre site and the decision taken by Blackburn with Darwen Council allows us to move forward with our designs in liaison with specific retailers. On the back of the Cathedral Quarter development we again look forward to working closely with the council to bring forward another major regeneration project.”

Simon Jones, Growth Programme Director at Blackburn with Darwen Council, continued: “The council are pleased to announce that Maple Grove has been selected as our preferred partner for the development of a new retail led mixed use scheme at Brown Street in Blackburn. “Maple Grove was selected following a competitive tender and the council looks forward to working with the developer developing a quality retail scheme which supports the town centre.” 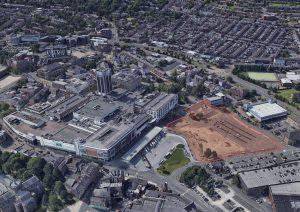 Have Covid-crisis projects shown us the future for public-private partnerships? By Christine Winstanley, MD of Eric Wright Health & Care Traditionally, strong relationships between...

On Tuesday 8th September, work began to create a new cycleway along the Solway Coast.  Work on the scheme is being carried out by the Eric Wright Civil...

Proud finalist at the CIOB Construction Manager of the Year Awards

Nominated by the architect, JM Architects, for a project he recently delivered in Kirkby Lonsdale, we are delighted that Mark Prince has made the...