Lindsay Gregory, Site Engineer for Eric Wright Civil Engineering, was nominated by her colleagues for the coveted Women in Civil Engineering award.  Up against a number of amazing women that were more than worthy of the award, Lindsay won, and it is not hard to see why.

At school, Lindsay preferred practical studies and chose an apprenticeship at William Hare. She attended a training-centre to learn shop-floor skills like welding, gas cutting, milling and turning and was the only female out of 150 students.  Top of her group she trained as a technician, modelling heavy portal frame steel structures in StruCAD and becoming self-employed at 22.

At 34, deciding that a desk was not for her, Lindsay retrained in civil engineering at Bolton College. She joined EWCE in May 2015 as a setting-out engineer and was supported in her studies, achieving her HNC with distinction.

Her first contract for EWCE was in the challenging environment of constructing a landfill cell on a live site at Whinney Hill in Accrington.  Since then, Lindsay has undertaken several highways contracts including junction works and public-realm connecting the Bolton Interchange with the town.

Lindsay has also worked on the Cumbria Infrastructure Recovery Programme to scope, design and repair 40No bridges under a single contract, surveying each structure, including using submergible technology.  She was the lead engineer on replacement D&B Ford Bridge in Burneside and site agent on the reconstruction of Rigmaden Bridge, a listed C19 iron 47m span structure over the River Lune.

Along with her day job, Lindsay is an active STEM CITB trained learning ambassador, attending events to encourage young people into civil engineering.  Passionate about changing the perception and culture within the sector, she is an active mentor, training learners from Level-3 to students in their third masters’ year.  She mentored learners over the summer teaching them to use engineering equipment and experience of site life.

Commenting on Lindsay’s win, Diane Bourne, managing director for Eric Wright Civil Engineering & Group Technical Director said: “We are hugely proud of Lindsay and all that she has achieved.  We shouldn’t underestimate the hard work and effort needed to be successful in our industry, regardless of gender.  That said, we need to encourage and inspire more females and Lindsay is a great credit to the team and her profession.”

After her fantastic win, Lindsay commented: “I would like to thank my wider team for their ongoing support and guidance especially my mentor Clive Ashton.  It’s been a tough few years, so this recognition has made it all worthwhile.  I am very proud of myself and this award will spur me on to continue this journey.” 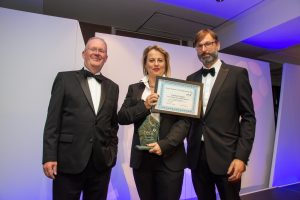