Eric Wright Construction (EWC) completed four new education facilities for North West schools funded by the Department for Education (DfE) via its major public sector framework or in support of Local Authorities. All four were delivered on or ahead of programme, prior to the start of term.

The projects include the design and construction of Lotus School in Blackpool, a purpose-built school to accommodate up to 48 students who have an education, health and care plan for Social, Emotional and Mental Health (SEMH) as their primary need. The school has been carefully designed to ensure that students who have struggled accessing mainstream education are fully supported to succeed.

The second project completed is Preston Muslim Girls High School, a design and build project which has delivered a new two storey school building, additional classrooms, science and ICT suites as well as SEN rooms and staff office areas. The scheme was completed 6 weeks early and handed over with zero defects.

In Bolton, the team has completed the second phase of the design and construction of a temporary single storey modular school building for 180 pupils with main entrance, classrooms, science and ICT suites, special educational needs (SEN) rooms and staff office areas for the Kings Leadership Academy. A single storey building was also completed for Fairfield Road Primary School in Droylsden, Manchester which provides a new hall, canteen, kitchen and servery facilities, ICT provision and staff office areas together with landscaping works.

Commenting on the delivery of the new education facilities, James Eager, framework director for Eric Wright Construction said: “Despite the immense challenges of the last six months, our teams have worked unbelievably hard to meet the agreed completion dates, whilst working under Covid-safe site conditions and I’d like to thank the team for all of their hard work in helping us to deliver these much needed new school facilities.

“We have continued to develop a strong, collaborative relationship with the DfE, their technical teams and the schools themselves which has enabled us to make really good progress and achieve the timescales despite all of the disruption this year.”

Cllr Kath Benson, Blackpool Cabinet Member for Schools, Education and Aspiration said, “The dedication to the timely delivery of Lotus School and the professional collaboration between Eric Wright Construction, Blackpool Council and the DfE means that Blackpool now has a wonderful facility that can nurture and support our young people and make a real difference to their start in life.”

EWC, which is based in Bamber Bridge near Preston, was appointed to the DfE Low Value Framework in November 2017. Since then it has completed a number of projects for schools across the region including Phase 1 of the Kings Leadership Academy last year along with creating new facilities for St John’s Primary in Stockport and the Queen Elizabeth Studio School in Kirkby Lonsdale. 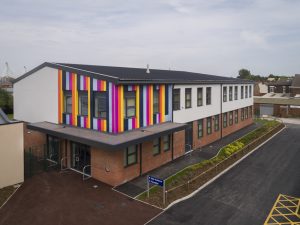