Eric Wright Civil Engineering (EWCE) has completed £5.9m of improvement works for Manchester City Council to remove the notorious pinch-point on the A57 Hyde Road in Gorton, one of the city’s busiest trunk roads.

Strategically important as the arterial route from the City, Hyde Road is a dual carriageway however, for 300m a disused 19th century railway bridge narrowed the road into a single lane, causing regular congestion.

The bridge abutment and retaining-walls were demolished and major earthworks undertaken at pre-construction. Highway works included relocation and widening of a TOUCAN crossing, junction improvements, carriageways re-surfacing, segregated cycleway, drainage and landscaping. EWCE worked with the Council to develop traffic-management plans to minimise disruption and rat-running along residential streets and maintain two-way flows.

EWCE also proposed an increased grade of sheet-pile to ensure driveability and provide better deflection characteristics. The piles were installed using a Giken silent pile press with water jetting to minimise disruption to adjacent businesses and residents. Innovative temporary works allowed the piling-rig to work at the higher level, limiting disruption on the A57.

Additional works included installing a 150m sheet-piled, 6m high retaining-wall and realigning the carriageway. Despite working under tight Covid-19 restrictions on site the A57 project was delivered to programme.

As part of its social value commitment to the local area, EWCE had planned a variety of activities, including school visits, but these were prohibited by the COVID-19 pandemic. Instead, a donation of £10,000 was made to local charity Read Manchester, an initiative which connects Year 6 pupils with secondary school pupils through a shared reading programme. The donation funded a free book called “The Kid Who Came From Space“, which was given to 7,351 local children in July, as part of a city-wide initiative to help them get ready for high school.

As well as the reading initiative, EWCE also provided a site engineer apprenticeship for Jacob Carter, a former EWCE work experience placement and Greater Manchester resident. Jacob was then appointed as trainee site engineer and is now continuing his studies with a Level-4 NVQ in Construction Management.

Commenting on the completion of the works Diane Bourne, managing director of Eric Wright Civil Engineering said: “The A57 works have hugely improved the traffic flow on this main arterial road and we are very proud that our team was able to work through Covid restrictions to deliver the project safely and on time.

“When we were awarded the tender for the project, we scored very highly on the social value aspect of our bid, so we were determined to find a way to fulfil that commitment.

“Ownership of EWCE by a Charitable Trust demands we maximise the delivery of social value through our contracting and the donation to Read Manchester totally aligned with the Charitable Trust’s aim of supporting young people and educational charities.”

Manchester City Council’s Executive Member for Environment, Planning and Transport Councillor Angeliki Stogia, said: “The Hyde Road improvement works were vital in removing pressure from one of Manchester’s busiest roads, easing congestion and replacing a valued piece of walking and cycling infrastructure. Eric Wright were an integral part in the success of this scheme and the way they dealt with the project challenges, including Covid, was impressive.

“Not only was the installation of a new cycling bridge well overdue, it was a staggering work of engineering that residents are not likely to witness again. Later this year a project will begin to improve additional sections of the Fallowfield Loop following a consultation where residents told us how they saw the future of the cycling route.” 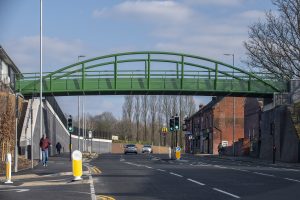