A significant milestone took place on Eric Wright Civil Engineering’s project to protect the A685 west of Grayrigg, with the diversion of the Thursgill Beck into a new channel.  The explosive force of the beck is undermining the Kendal to Tebay road, cutting into a slope on top of which the road runs.  EWCE were employed to design and build a solution by Cumbria County Council as part the Infrastructure Recovery Programme that has been in progress since Storm Desmond in 2015.

Antony Mulligan, Senior Project Manager for EWCE, “It is very pleasing to see a key milestone achieved and certainly redirecting the river flows from the old to the new channel is one we looked forward to completing as, although we have completed similar projects to these in our recent past, it’s not something we do every day!  Our next main focus is repairing the failed slope, which will then safeguard Cumbria’s road users for years to come.”

The new course of the beck was carefully designed by PBA Ecology, EWCE’s long term partner, with input from the Local Lead Flood Authority and the North West Rivers Trust.  The site is just outside the Lake District National Park with the Dalesway footpath running adjacent to the works.  It is an ecologically sensitive site with the beck flowing into the River Kent via the River Mint, which are both important salmon rivers and contain native freshwater crayfish. 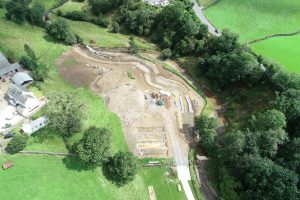 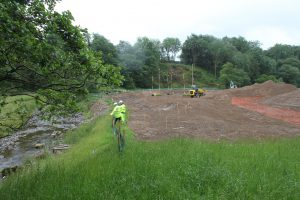 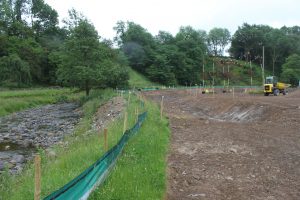 A multi-million-pound cinema, retail and restaurant complex, that will change the face of Burnley town centre, is set to be given the rubber stamp of...

We are all incredibly proud of two members of staff on achieving success: Lindsay Gregory, Site Engineer with Eric Wright Civil Engineering has received...

Read more
17 January 2020 · 16:36 Maple Grove Developments, part of the Eric Wright Group, has secured planning for the new @AEWarchitects designed P… https://t.co/WucmsFJOHU
16 January 2020 · 12:16 Today, the @PlaceNorthWest PRS Conference took place at the Science & Industry Museum, Manchester. Every chair in… https://t.co/MEMF87eIOX
15 January 2020 · 14:52 If you are attending the @turleyplanning Breakfast Event tomorrow, why not introduce yourself to Karen and Nik?… https://t.co/xhsgK2OXRS
14 January 2020 · 17:03 Eric Wright FM are looking to recruit a Planner. Please use the link for further details or to apply for the role –… https://t.co/Y8Uu8RxBjc