In each case the bridges, for pedestrians, cyclists and wheelchairs, provide vital links to facilities while acting as gateways to their conurbations.

The £1.5 million Spinningfields Footbridge was swung into position over the River Irwell at the end of January, providing a gateway from the new development in Manchester to Salford railway station.

It provides an attractive route for commuters, shoppers, visitors and residents of Spinningfields, an exciting new project developed by Allied London Properties. The bridge’s design contrasts with and complements the neighbouring bridges.

The curved main span is 44 metres long, supported at the Manchester bank by two bearings on an abutment and on a pair of inclined steel piers at the Salford bank.

The bridge is primarily a pedestrian and cycle link, but has been developed to form places for meeting and relaxing. At the centre of the main span the deck is a generous 4.5 metres wide and includes an 8-metre long bench.

The bridge, which will be lit at night for safety and aesthetic reasons, is due to open at the beginning of April. 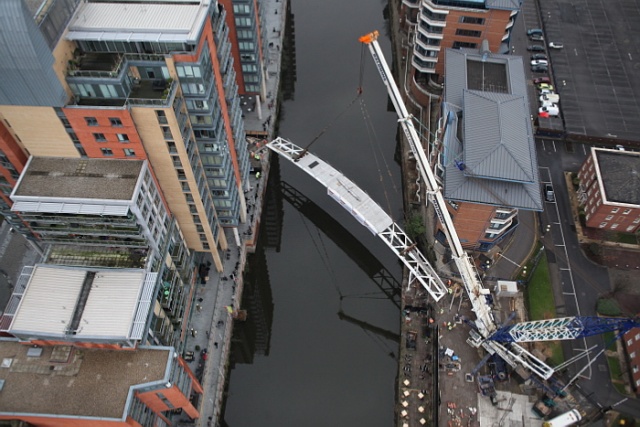 Meanwhile across the Pennines in Bradford, West Yorkshire, Eric Wright Civil Engineering is delivering a new contemporary bridge that will be at the heart of a walking and cycling greenway connecting East and West Bowling with Marshfields and Little Horton.

It crosses the busy Manchester Road into the city centre and to other important amenities such as Bradford University, Bradford College and St Luke’s Hospital.

The striking design which forms part of the structure gives the bridge a distinctive feature that acts as a gateway to the city.

The £2 million bridge is part of the Sustrans Connect2 Manchester Road Bridge project, which won the TV vote in December 2007 to bring £50 million from the Big Lottery Fund to 79 communities across the UK and create networks for everyday journeys for people travelling by foot or bike.

The contract involved clearing the site and installing facilities for the builders before demolition of the previous bridge in sections.

The new bridge is made of more than 350 tonnes of steel, is 210 metres long in total with two main spans over Manchester Road of 22 metres and 24 metres. It is supported by almost 100 piles buried into the ground engineered to avoid underground services and Bradford Beck. The central steel feature reaches more than 17 metres above Manchester Road.

EWCE has worked with Bradford Council, the community led company Bradford Trident and transport charity Sustrans to deliver this project, which is designed to be one of the first landmarks visitors entering the city centre will see.

Colourful lighting on the footway of the bridge will indicate when events are taking place in the city centre at night.

The opening of the bridge is likely to be towards the end of June/early July.

Well done to Alan Crilly and the site team for achieving a very good score on their recent considerate constructors report. The Considerate Constructors...

Maple Grove Developments has completed the sale of a student accommodation site at Hallfield Road, York to McLaren Properties

Maple Grove Developments has completed the sale of a student accommodation site at Hallfield Road, York to McLaren Properties